Algebra trick of the day

I’ve decided to start recording algebra tricks as I end up using them. Today I actually have two tricks, but they end up being used together a lot. I don’t know if they have more formal names, but I call them the “trace trick” and the “rank 1 relaxation”.

Suppose that we want to maximize the Rayleigh quotient $\frac{x^TAx}{x^Tx}$ of a matrix $A$. There are many reasons we might want to do this, for instance of $A$ is symmetric then the maximum corresponds to the largest eigenvalue. There are also many ways to do this, and the one that I’m about to describe is definitely not the most efficient, but it has the advantage of being flexible, in that it easily generalizes to constrained maximizations, etc.

The first observation is that $\frac{x^TAx}{x^Tx}$ is homogeneous, meaning that scaling $x$ doesn’t affect the result. So, we can assume without loss of generality that $x^Tx = 1$, and we end up with the optimization problem:

This is where the trace trick comes in. Recall that the trace of a matrix is the sum of its diagonal entries. We are going to use two facts: first, the trace of a number is just the number itself. Second, trace(AB) = trace(BA). (Note, however, that trace(ABC) is not in general equal to trace(BAC), although trace(ABC) is equal to trace(CAB).) We use these two properties as follows — first, we re-write the optimization problem as:

I ended my last post on a somewhat dire note, claiming that least squares can do pretty terribly when fitting data. It turns out that things aren’t quite as bad as I thought, but most likely worse than you would expect.

The theme of this post is going to be things you use all the time (or at least, would use all the time if you were an electrical engineer), but probably haven’t ever thought deeply about. I’m going to include a combination of mathematical proofs and matlab demonstrations, so there should hopefully be something here for everyone.

My first topic is going to be, as promised, least squares curve fitting. I’ll start by talking about situations when it can fail, and also about situations when it is “optimal” in some well-defined sense. To do that, I’ll have to use some Fourier analysis, which will present a good opportunity to go over when frequency-domain methods can be very useful, when they can fail, and what you can try to do when they fail.

To start, I’m going to do a simple matlab experiment. I encourage you to follow along if you have matlab (if you have MIT certificates you can get it for free at http://matlab.mit.edu/).

The goal of this post is to give an overview of Bayesian statistics as well as to correct errors about probability that even mathematically sophisticated people commonly make. Hopefully by the end of this post I will convince you that you don’t actually understand probability theory as well as you think, and that probability itself is something worth thinking about.

I will try to make this post somewhat shorter than the previous posts. As a result, this will be only the first of several posts on probability. Even though this post will be shorter, I will summarize its organization below:

I just finished presenting my recent paper on stochastic verification at RSS 2011. There is a conference version online, with a journal article to come later. In this post I want to go over the problem statement and my solution.

Abstractly, the goal is to be given some sort of description of a system, and of a goal for that system, and then verify that the system will reach that goal. The difference between our work and a lot (but not all) of the previous work is that we want to work with an explicit noise model for the system. So, for instance, I tell you that the system satisfies

where $f(x)$ represents the nominal dynamics of the system, $g(x)$ represents how noise enters the system, and $dw(t)$ is a standard Wiener process (the continuous-time version of Gaussian noise). I would like to, for instance, verify that $h(x(T)) < 0$ for some function $h$ and some final time $T$. For example, if $x$ is one-dimensional then I could ask that $x(10)^2-1 < 0$, which is asking for $x$ to be within a distance of $1$ of the origin at time $10$. For now, I will focus on time-invariant systems and stability conditions. This means that $f$ and $g$ are not functions of $t$, and the condition we want to verify is that $h(x(t)) < 0$ for all $t \in [0,T]$. However, it is not too difficult to extend these ideas to the time-varying case, as I will show in the results at the end.

Last time I talked about linear control, I presented a Linear Quadratic Regulator as a general purpose hammer for solving linear control problems. In this post I’m going to explain why LQR by itself is not enough (even for nominally linear systems). (Author’s note: I got to the end of the post and realized I didn’t fulfill my promise in the previous sentence. So it’s redacted, but will hopefully be dealt with in a later post.) Then I’m going to do my best to introduce a lot of the standard ideas in linear control theory.

My motivation for this is that, even though these ideas have a reasonably nice theory from a mathematical standpoint, they are generally presented from an engineering standpoint. And although all of the math is right there, and I’m sure that professional control theorists understand it much better than I do, I found that I had to go to a lot of effort to synthesize a good mathematical explanation of the underlying theory.

However, this effort was not due to any inherent difficulties in the theory itself, but rather, like I said, a disconnect in the intuition of, and issues relevant to, an engineer versus a mathematician. I’m not going to claim that one way of thinking is better than the other, but my way of thinking, and I assume that of most of my audience, falls more in line with the mathematical viewpoint. What’s even better is that many of the techniques built up for control theory have interesting ramifications when considered as statements about vector spaces. I hope that you’ll find the exposition illuminating.

My last few posts have been rather abstract. I thought I’d use this one to go into some details about the actual system we’re working with.

As I mentioned before, we are looking at a cart pole in a water tunnel. A cart pole is sometimes also called an inverted pendulum. Here is a diagram from wikipedia: 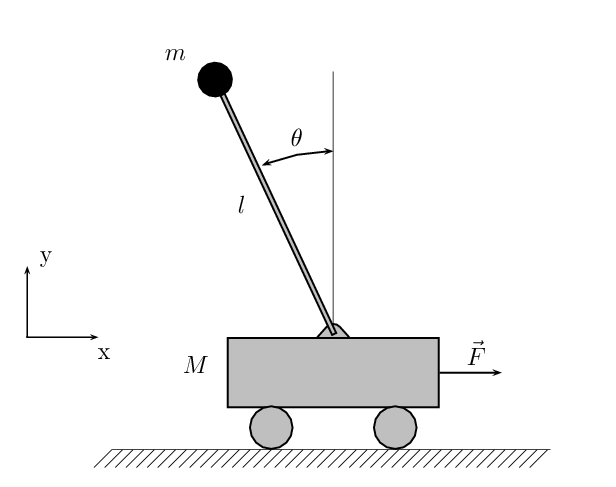 The parameter we have control over is F, the force on the cart. We would like to use this to control both the position of the cart and the angle of the pendulum. If the cart is standing still, the only two possible fixed points of the system are $\theta = 0$ (the bottom, or “downright”) and $\theta = \pi$ (the “upright”). Since $\theta = 0$ is easy to get to, we will be primarily interested with getting to $\theta = \pi$.

The purpose of this post is to introduce you to some of the basics of control theory and to introduce the Linear-Quadratic Regulator, an extremely good hammer for solving stabilization problems.

To start with, what do we mean by a control problem? We mean that we have some system with dynamics described by an equation of the form

where $x$ is the state of the system and $A$ is some matrix (which itself is allowed to depend on $x$). For example, we could have an object that is constrained to move in a line along a frictionless surface. In this case, the system dynamics would be

This summer I am working in the Robotics Locomotion group at CSAIL (MIT’s Computer Science and Artificial Intelligence Laboratory). I’ve decided to start a blog to exposit on the ideas involved. This ranges from big theoretical ideas (like general system identification techniques) to problem-specific ideas (specific learning strategies for the system we’re interested in) to useful information on using computational tools (how to make MATLAB’s ode45 do what you want it to).

To start with, I’m going to describe the problem that I’m working on, together with John (a grad student in mechanical engineering).

Last spring, I took 6.832 (Underactuated Robotics) at MIT. In that class, we learned multiple incredibly powerful techniques for nonlinear control. After taking it, I was more or less convinced that we could solve, at least off-line, pretty much any control problem once it was posed properly. After coming to the Locomotion group, I realized that this wasn’t quite right. What is actually true is that we can solve any control problem where we have a good model and a reasonable objective function (we can also run into problems in high dimensions, but even there you can make progress if the objective function is nice enough).

Beyond Bayesians and Frequentists

(This is available in pdf form here.)

If you are a newly initiated student into the field of machine learning, it won’t be long before you start hearing the words “Bayesian” and “frequentist” thrown around. Many people around you probably have strong opinions on which is the “right” way to do statistics, and within a year you’ve probably developed your own strong opinions (which are suspiciously similar to those of the people around you, despite there being a much greater variance of opinion between different labs). In fact, now that the year is 2012 the majority of new graduate students are being raised as Bayesians (at least in the U.S.) with frequentists thought of as stodgy emeritus professors stuck in their ways.

If you are like me, the preceding set of facts will make you very uneasy. They will make you uneasy because simple pattern-matching – the strength of people’s opinions, the reliability with which these opinions split along age boundaries and lab boundaries, and the ridicule that each side levels at the other camp – makes the “Bayesians vs. frequentists” debate look far more like politics than like scholarly discourse. Of course, that alone does not necessarily prove anything; these disconcerting similarities could just be coincidences that I happened to cherry-pick.

Humans are very good at correctly generalizing rules across categories (at least, compared to computers). In this post I will examine mechanisms that would allow us to do this in a reasonably rigorous manner. To this end I will present a probabilistic model such that conditional inference on that model leads to generalization across a category.

There are three questions along these lines that I hope to answer:

I suspect that the mechanisms for each of these is rather complex, but I am reasonably confident that the methods I present make up at least part of the actual answer. A good exercise is to come up with examples where these methods fail.

Fortunately, both cases are pretty straightforward as long as you are careful about using Bayes’ rule. However, today I am going to focus on the latter case. In fact, I will restrict my attention to the following problem:

You have a coin that has some probability $\pi$ of coming up heads. You also know that all flips of this coin are independent. But you don’t know what $\pi$ is. However, you have observed this coin $n$ times in the past. But for each observation, you aren’t completely sure that this was the coin you were observing. In particular, you only assign a probability $r_i$ to your $i$th observation actually being about this coin. Given this, and the sequence of heads and tails you remember, what is your estimate of $\pi?$